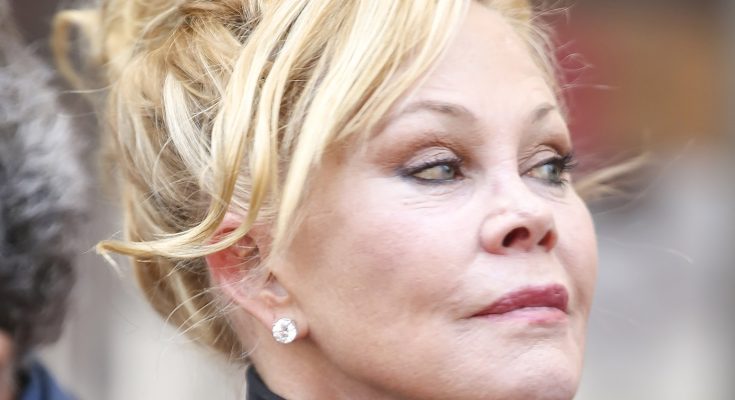 Melanie Griffith looks beautiful without makeup. Below, she is pictured with little to no makeup on her face.

Melanie was born August 9, 1957 in New York City, New York. She appeared in Working Girl and received Golden Globe award for her role. More recently she starred in Autómata, Thirst and Day Out of Days. elanie was married for six months to Don Johnson. Later Melanie married co-star Steven Bauer with whom she has a son, the couple divorced after five years. Melanie later reunited with her ex-husband and they re-married in 1989 and Melanie gave birth to their daughter Dakota Johnson in the same year. The marriage lasted another six years. In 1996, Melanie married Antonio Banderas and they have daughter together, who was born the same year. In 2009 Melanie was on the surgery due to her skin cancer. In summer 2014, couple announced friendly split up.

Melanie Griffith is looking marvellous when she is makeup-free. Check out her natural beauty and glorious skin.

You know who helped me a lot? Jane Fonda. She said, Look at how many times I’ve been up and I’ve been down. So don’t worry about anything.

I like smoking! I mean, God, I quit everything else, can’t I smoke?

I would just like to be able to give to people through acting. If I can entertain people by being somebody else and allow somebody to feel something, then that makes me feel good.

I would be really happy to be working and be able to do my craft.