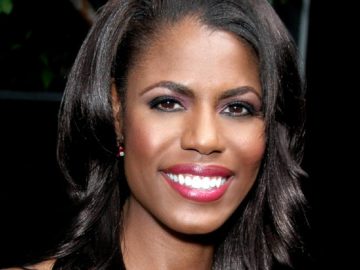 Omarosa Manigault looks lovely without makeup. Below, she is pictured with little to no makeup on her face.

Omarosa was born February 5, 1974 in Youngstown, Ohio. She holds a bachelor’s degree in broadcast journalism from the Central State University. Later, she also received master’s degree and pursued a doctorate that she never finished. Manigault became famous thanks to her appearance on the reality show The Apprentice. That’s where she met future president Trump.

Omarosa Manigault is looking captivating when she is makeup-free. Check out her natural beauty and gorgeous skin.

I’d like to believe that ‘The Apprentice’ was a big hit because I was such a superstar in the first season.

I check Trump every time he says something crazy. I told him to stop calling Elizabeth Warren ‘Pocahontas.’

I got to sit in the inauguration of Bill Clinton, Bush, Obama, and when we got to the Trump inauguration and they said this was the largest crowd size, I’m like, ‘Man, I’ve been to a lot of inaugurations; this wasn’t the biggest crowd size.’ But I didn’t, you know, I didn’t want to be the one to break it to him.

The one thing that I learned from politics is you have to know how to watch your own back – and in some instances, you gotta watch your front, too.

Donald J. Trump is not only a racist but a misogynist and a bigot.